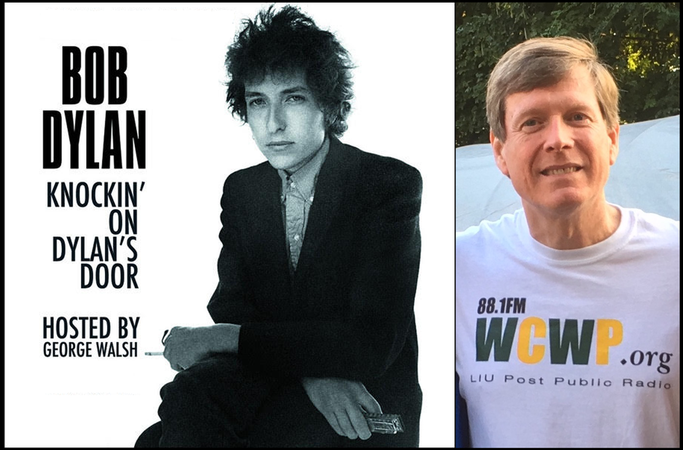 
Join us for some of the greatest songs ever written. The music of Bob Dylan showcases folk-rock, blues, country, gospel and live performances. Each show includes Dylan cover versions, offering a diverse mix of artists, musical themes and genres. Knockin’ On Dylan’s Door features an epic selection of Dylan related music, from Woody Guthrie covers, to songs that influenced The Beatles, Stones, Hendrix, Springsteen, Elvis Costello and many others. Listen for insightful historical context and find out why Dylan is one of the greatest songwriters from the explosive 1960’s to today.
​


​George Walsh
The music and lyrics of Bob Dylan continue to inspire. George, born in NYC, is one of five musical siblings who grew up in Port Washington. George has worked at WBAI, WPSC and his association with WCWP and alumni Tony Traguardo go back to The 1980’s.
As a Rolling Stone magazine intern, George interviewed musicians including Grace Slick for Jefferson Airplane CD reissues. George is a volunteer for ‘LI Music Hall of Fame’, has studied acoustic guitar with Jorma Kaukonen (Hot Tuna) and is a member of ‘LI Mandolin and Guitar Orchestra’ for over 20 years.  George has written about the solo Beatle years 1969-1980 and always looks forward to capturing the essence of Bob Dylan music.
Long Island Mandolin and Guitar Orchestra